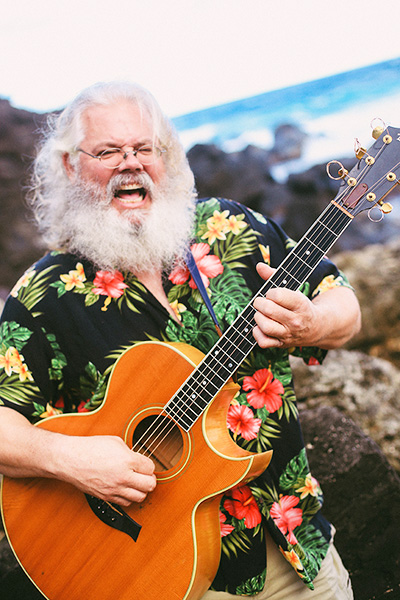 Brian von Ahsen is a singer/songwriter based in Honolulu, Hawai‘i on the island of Oahu where he’s lived and worked since 2001. He was most often seen in performance fronting his band Social Smokers at Kainoa’s Pancake House and Sports Bar in Haleiwa (“Where the North Shore Drinks”).

Despite his folk and rock major influences, Brian’s introduction to music was as a classically trained singer, studying voice at The University of Iowa. At age 17 he sang baritone in the Universal Academy for Music’s Bicentennial National Choir in 1976 which toured Europe and performed at such venues as Carnegie Hall, Independence Hall, Royal Albert Hall and Notre Dame Cathedral. Everything changed when he picked up an acoustic guitar in 1980 and started learning Bob Dylan songs and his voice teacher told him he could not do both folk music and opera… so Brian chose folk.

Over the years Brian has performed in a wide variety of situations… from singing for an 80’s top 40 cover band called Stryker in bars and at school dances all over the Midwest, to playing his solo act at open mics, bars and even once he played a two and a half hour afternoon set in front of a 5,000-strong festival crowd in rural Wisconsin.

Before coming to Hawai‘i, Brian lived in Osaka, Japan for six years and during that time played in clubs regularly. It was in Osaka where Brian first formed his own band and began writing songs more prolifically. By the time he left, he and his band had received notoriety, appearing on radio programs and large music festivals.

Brian plays a large selection of classic folk rock and other music by noted musicians such as Billy Joel, Bob Dylan, James Taylor, Loudon Wainwright III, Neil Young, and Tom Waits along with a selection of his original material, best described as contemporary alternative joke-folk. He also has a great set of love ballads as well as catchy songs in French, Chinese and Japanese!

Some of the songs that Brian plays include:

Across The Universe
The Beatles 1970

Penny For Your Thoughts
Peter Frampton 1975

The Leader Of The Band
Dan Fogelberg 1981

The Water Is Wide
Traditional 1906

Till There Was You
Meredith Wilson 1957

You’ve Got A Friend
James Taylor 1971